I wanted to create a mod that could load 2 maps into quake 3 at the same time, and then switch between them with a portal. Like this game Prey that uses the Crysis engine. 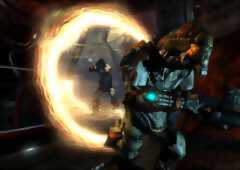 This portal doesn't wobble back and forth like other quake 3 portals. This is showing a second map loaded in background. There is a small seam around the brown and black pattern on the frame of the door.

I knew I was on to something when I got the two maps to load side by side. I burned about a day trying to load two maps using pointer arithmatic, and then I ended up converting the clip map to an array. I added a world variable to the entities, and client side renderer. But a bug in the renderer causes the player model to disappear.

This is the mapping tool showing the map split in to two separate pieces with a portal in between.

The audio overlaps, so I think this is far from working. It would be cool to turn this kamikaze blast in to a world teleport.